With emphasis increasingly being placed on data-driven decision making, data stewardship is gaining pace as a mechanism to unlock the potential benefits of data while safeguarding the rights of people. Given this aspiration of a more balanced, democratic mechanism for data governance, accountability is often identified as a key principle for data stewards. While accountability may be universally acknowledged as desirable, it is often difficult to define and implies different ideals based on context. For instance, accountability in the public sphere revolves around minimizing corruption, and in the arena of corporate accountability, it refers to the corporation being responsible to its stakeholders for the economic, social, and environmental impact of its activities. However, these ideas need not necessarily be shared in the sphere of data governance.

Generally speaking, accountability is defined as “the obligation of an individual or an organization (either in the public or the private sectors) to accept responsibility for their activities and to disclose them in a transparent manner. This includes the responsibility for decision-making processes, money, or other entrusted property”. A paper emphasizing the lack of a concrete definition of accountability in a humanitarian context, identified up to 16 concepts amongst the definitions, and narrowed down four themes -empowering aid recipients, being in an optimal position to do the greatest good, meeting expectations, and being liable. In the context of artificial intelligence (AI), accountability “includes an obligation to report, explain, or justify algorithmic decision-making as well as mitigate any negative social impacts or potential harms.”. In the context of data rights, accountability has traditionally been understood to mean ‘notice and consent’, however, an authoritative definition of accountability in data governance is not available.

Different models of data stewards allow the data principal to exercise varying levels of accountability, thus, making them more comfortable with the notion of sharing their data. Drawing upon discussions and literature around artificial intelligence, we look at how a data steward could potentially empower the data principal to hold data requesters accountable, thus, enabling the sharing of data without hesitation – 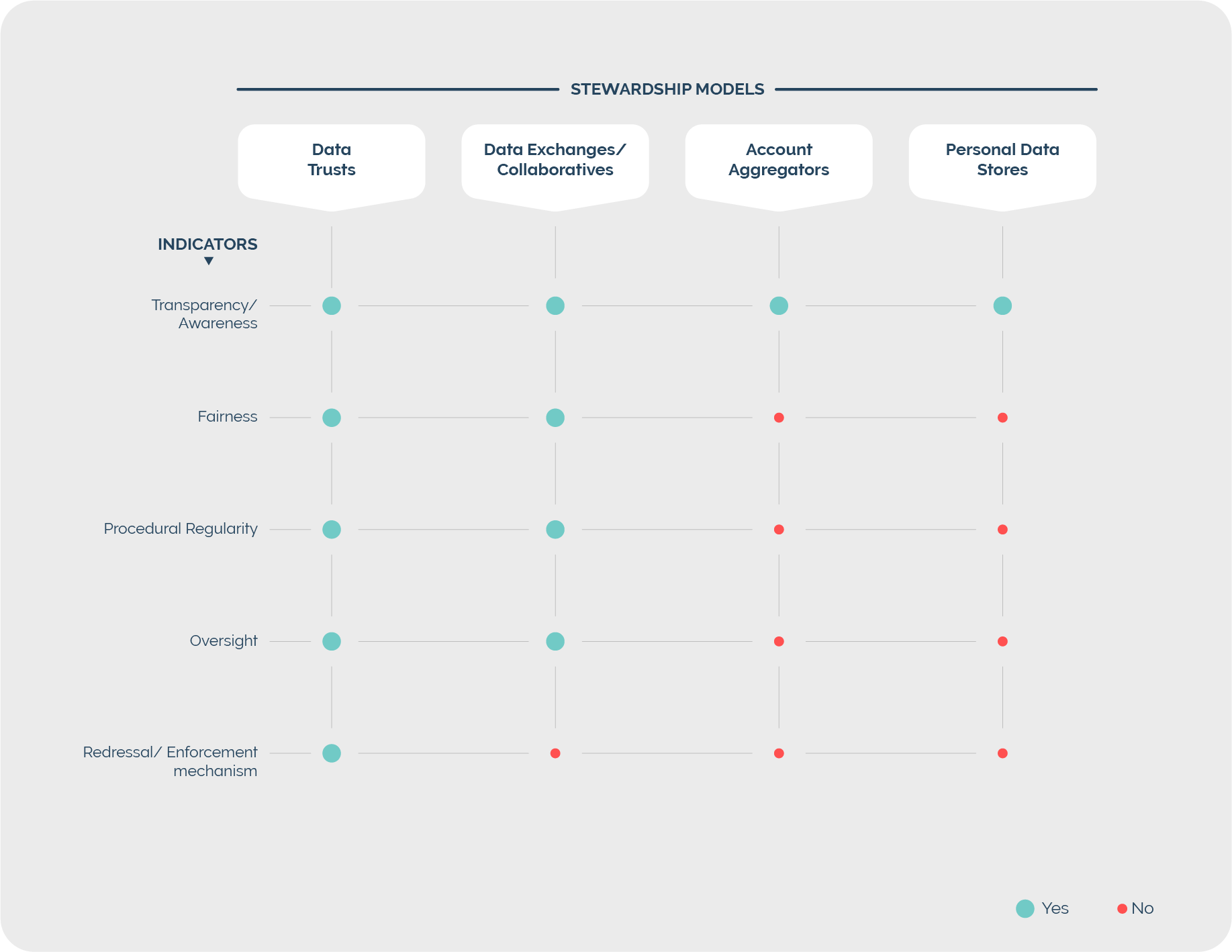 It is observed that all the stewardship models offer the power of exercising accountability to the data principal, albeit at varying levels and in different forms. In a sense, accountability is in-built in all data stewardship models. However, the adoption of certain measures by data stewards could enhance the trust that they enjoy among data principals. Data stewards can play a role in the creation of a culture of privacy across and inside organizations by formalizing the safeguards through contractual agreements with the third parties and companies who act as data requesters.

Through this, stewards can foster a larger accountability framework between all the concerned entities such as the steward, data requester, and data fiduciary. While the legal safeguards in the PDP Bill (Personal Data Protection Bill, 2019)and the NPD Report (Report by the Committee of Experts on Non-Personal Data Governance Framework)pertain to data custodians/fiduciaries, there is no mention of data requesters in other forms. Stewards or individuals (through their stewards) could be empowered to hold data requesters accountable through contractual agreements that delineate a specific grievance redressal mechanism and scope and mode of remediation in the event of a breach of the agreement.

That said, any potential breach of agreement is hard to discover. However, a legal mandate to conduct an annual audit of usage of the data, and share that with relevant stakeholders could enhance trust amongst the different entities and enable them to hold each other accountable to agreed-upon principles. It is undeniably in a data steward’s business interest to be accountable, transparent, and self-regulate.

It is opined that co-regulation combining both governmental regulation and self-regulation, the use of which has been endorsed in privacy governance, would also ensure greater accountability. An acknowledgment of ownership rights of individuals over their non-personal data as done in the NPD Report can form the basis of building regulatory mechanisms assuring accountability to the data principal. While a grievance redressal mechanism can be agreed upon by other means as explained above, an external enforcement mechanism would have to be led by a regulatory organization or a state agency.

This article was written by Preethi Sundararajan. Preethi is a second-year MA (Public Policy and Governance) student at the Azim Premji University. Her interests lie in governance issues pertaining to accountability/transparency and the financial sector, and the rule of law in India.

Health data sharing being set up to fail by a regulatory mashup: roles of the NDHM, PDPB, consent managers and the NHA

By The Data Economy Lab

By The Data Economy Lab Team